From the 20th to 22nd of September 2019, we were given the opportunity to organize the event #HazAlgoMálaga, whose objective was to give visibility to different social causes and invite the citizens to get involved in these efforts, therefore moving from awareness to action.

Although it was the first event of this type that we organized, we have to say that we were quite satisfied with the result as well as with turnout. You can read the full report about the event here.

However, one of the things that people who attended the event mentioned the most to us was that these kinds of environmental awareness events do not have a real impact, especially those related to waste generation, if they are not accompanied by measures that in some way “force” the public to follow the trend. For example, a city council regulation to prohibit single-use plastic.

This is an option that we had never explored, so we decided to request permission to participate in the City Council meeting and vocalize our proposal:

A couple of months later, I was called from the City Council to participate in the plenary that would take place the following day (January 30, 2020). Here is my statement:

In the statement, we requested the establishment of a municipal ordinance that limits the use of single-use plastics, in those establishments/events which are organized by the City Of Torremolinos. Furthermore, we took the opportunity to request the necessary authorizations to make our “Monument to Responsibility”, the final point that we had planned to make in #HazAlgoMálaga. It is a work of art, inspired by the one we already made in Costa Rica in January 2019, made with garbage and other plastic materials that draws attention to the problem and helps raise awareness.

And please note, a monument made of plastics doesn’t necessarily have to be ugly:

In short, we think the time to take action has arrived and we cannot wait for governments or companies to lead the way:

This is the first time we have tried to push for such an action, so we don’t know what the outcome will be.

But we’ll keep on informing and maybe it will encourage you to take action.

I want to end by thanking Chapka Assurances, the only sponsor we have in #HazAlgoMálaga, and thanks to which we were able to launch this initiative. 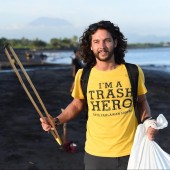